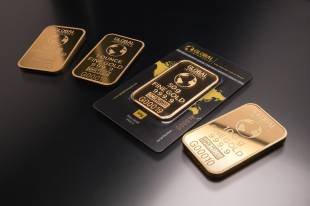 We tell how the trade war affects the price of gold.

In our previous report on gold prices, we talked about the initiation of the trade war between the U.S. and China. America insists on changing China's intellectual property methods and raises import duties to 25% on many Chinese products.

On Wednesday, 4th of April, against the backdrop of tension between Washington and Beijing the price of gold increased to $1,333 per ounce.

"In the face of growing fears because of the global trade war initiation, investors see the attraction of the safe metal."

Bloomberg reports that the loss of confidence in the U.S. currency could result in the increase in the number of people willing to invest in gold.

Expert Peter Schiff predicts that the rise in gold prices will open new prospects for the yellow metal.

CEO of GraniteShares Will Rhind said that the investment demand for the physical gold has become an upward trend.

On Thursday, 5th of April, the dollar's positions have stabilized. Correction of the American currency was underpinned by the statement of the chief economic adviser of the President Donald Trump. Larry Kudlow said that the U.S. has no intention to participate in the trade war and is currently in the process of negotiation with China.

Analysts note that all trade wars will contribute to the growth of gold prices. Since early 2017, the price of the precious metal has grown by 16%.

On Friday, 6th of April, the market was worried by a new statement of the head of the U.S. state.

Trump intends to triple tariffs on import of Chinese goods. At the same time, he is ready to negotiate trade relations with Beijing.

Experts from the World Gold Council pointed out that gold prices will be driven by four factors in 2018:

2. A rotation into defensive assets

3. A growing of the middle-class contingent

They also noted that the maximum increase in volumes for the extraction of the precious metal was recorded in 2017.

Against the backdrop of sorting the relationship out, the dollar fluctuated, while market participants carefully followed the statements of political leaders.

Sunday events also had an impact on the dollar’s price: North Korea made a proposal to discuss the denuclearization of the Korean Peninsula.

The meeting between President Donald Trump and North Korean dictator Kim Jong-un could be a diplomatic breakthrough, but, as the experts note, both leaders are unpredictable.

Gold steadily maintains its positions because of the rapid situation changes in the world.

Saxo Bank’s Head of commodity strategy Ole Hansen noted that the overall geopolitical uncertainty will continue to support the price of gold:

"The increased volatility of the stock market is likely to provide basic support to gold. There is no doubt that some changes that occurred in 2016 will affect potential buyers who expect a price breakthrough above the $1,375 per ounce mark, just as in 2016."

Together with Global InterGold you can strengthen your financial security.