Is the race for cosmic gold starting this year?

We have already written that many countries around the world have joined the race for minerals on asteroids. Studies show that these celestial bodies contain, among other things, gigantic reserves of gold. The auspicious prospects for the exploration of extraterrestrial resources attract people in different parts of the world, and huge money is invested in the development of projects.

The first start is about to take place

Finally, it’s time to move from planning to taking action. The Chinese company Origin Space has announced its readiness to launch the first mining robot NEO-1 into space in this year’s November.

The tasks of the apparatus include exploration of asteroids located near the Earth in order to map out suitable targets for future resource extraction. In addition to that, NEO-1 will perform a series of test maneuvers which will be used in future expeditions for space minerals.

If the mission of NEO-1 proves to be successful, humanity will discover a new industry with multi-billion dollar profits. In the near future, Origin Space is planning to launch two more similar devices, one of which will go to the moon. 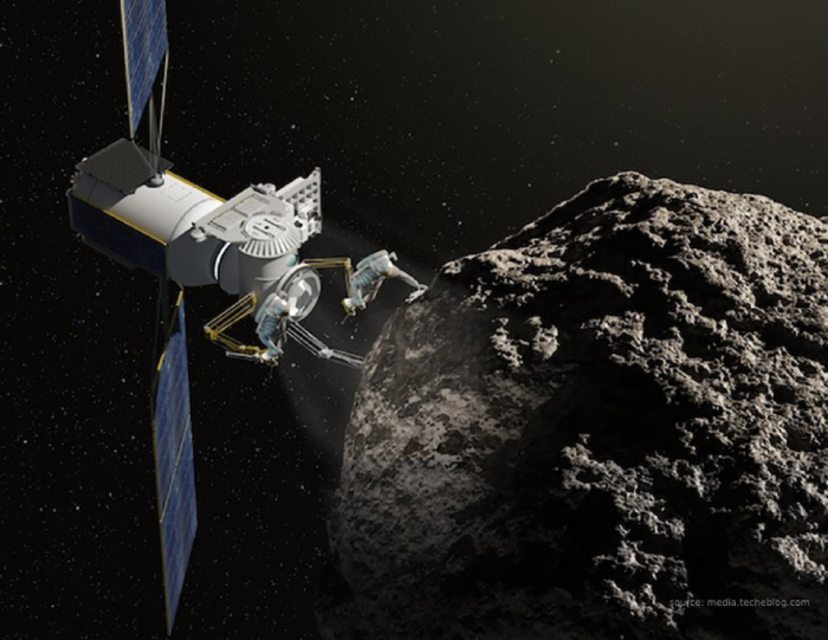 In the photo: that’s probably how gold mining on asteroids using robots will look like in the near future.

It seems that it is China that will take the first step towards seizing cosmic gold and other fossil resources. But one should not underestimate the main economic rival of China, namely the United States. President Donald Trump has issued a special decree affirming the right of Americans to dispose of the resources that they extract in space. There is no doubt that the competition for exploration of gold on other planets and asteroids will be intense and interesting.

While the yellow metal in different parts of the Universe awaits the arrival of the first prospectors, gold on Earth is under the watchful eye of society. Many are concerned about one thing: “When will the next rise in prices happen?”

Citigroup, one of the largest international financial conglomerates*, finds that gold has every chance to set another price record by the end of this year. Uncertainty about the upcoming US presidential election may contribute to this.

The GIG-OS platform suggests you protect yourself from the risks of an unstable market and plan out the purchase of investment bars considering the possible price increase. The "GIG-OS Fixing" project will help you in this endeavor.

Fix the cost of a 100-gram bar to avoid overpaying due to fluctuations in the market price of gold. Pay for the order gradually, making contributions in the most appropriate amount when it is convenient for you, and without the slightest damage to your personal budget!

While others are searching for gold in space, mine it in the easiest and most profitable way — on the GIG-OS platform!

*Conglomerate — the joint corporation made up of a number of different companies operating under the management of the parent company on the territory of one state; can also be transnational.

Rate this article:
Gold News
You May Also Like:
The New Victory of Gold: Russia
[VIDEO] What did little Luciano dream about, and where did it all lead to?
Withdrawal from the Gold Agreement: what does it mean?
RELATED NEWS
The unquenchable thirst for gold in the Middle East
Another country has entrusted its economic future to the precious metal.
Asian giant against the crisis: what do people in China think of gold?
What do the latest data from the mighty Eastern power say?
Prospects of gold: a breather before a new leap?
Should we expect the conquest of new frontiers?
Nigeria creates a “gold springboard” for its economic leap
The precious metal as the foundation of the nation’s well-being.
Turkey builds gold muscles
The country’s policy towards the precious metal speaks volumes.
Egypt’s fascination with possibilities of gold
The people of Egypt have taken a fresh look at the precious metal.
Billionaires enter the battle for gold
The gold industry is in the spotlight.
Bankers: gold is the top asset of 2020
The grand successes of the noble metal astonished the whole world.
Where gold is heading to: expert opinions
A significant psychological barrier has been overcome. What’s next?
Gold is unstoppable: a new historical record!
The yellow metal has reached the top of the “financial Everest”.
Take the test
and find out if you are exposed to the Lack of Financial Security virus.
Register on the platform to receive the test.