Gold is a legendary metal that occupies a special place in the history of mankind. For thousands of years, the yellow metal has served people as money and to this day it remains the most important tool of the financial system.

But why gold? Is there really nothing more suitable for the role of money in the periodic table of 118 elements?

Let's figure out why gold stands out against the background of other chemical elements.

Examples: argon, helium, mercury, bromine. It is very hard to utilize something that does not have a specific shape and changes its properties depending on temperature, pressure and other circumstances as money.

Examples: cerium, thorium, uranium. As a rule, these elements decompose and become radioactive. If you carry them in your pocket, you can get poisoned or receive a dose of radiation.

Examples: lithium, sodium, magnesium, calcium. They are highly reactive and very sensitive to environmental influences. Some may even spontaneously ignite.

Examples: scandium, yttrium, samarium. Rare-earth elements, as their name implies, are extremely rare in the earth's crust. This makes it impossible to widely use them as a medium of payment.

Examples: rutherfordium, nihonium. All are created artificially in laboratories. For this reason, such elements could not be used as cash payments in the past.

Examples: gold, silver, copper, nickel, aluminum. We finally got to the elements that are suitable for the role of money. For a metal to become an ideal monetary unit, it must be rare, but not too rare. For this reason, for example, copper and nickel, which are aplenty on Earth, are no good. 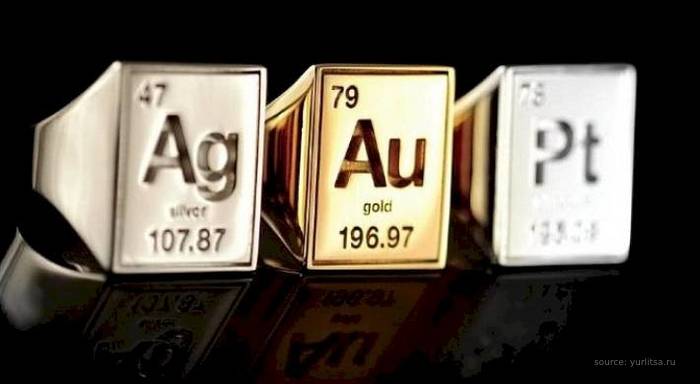 As a result of the selection process, only five precious metals remain: platinum, palladium, rhodium, silver and gold.

Rhodium and palladium were discovered by people relatively recently (in 1803), so the history of their use is very short.

Silver was used as money for a long time, yet a major flaw was found — silver darkens over time.

So, what do we have then? Platinum and gold. The melting of platinum requires an extremely high temperature, the maintenance of which entails a lot of work and resources. In contrast, gold melts at a lower temperature. The yellow metal is malleable and easy to process. Therefore, the people’s choice is rather obvious.

Gold does not evaporate, does not burn, is not toxic, and won’t irradiate its owner. Gold is quite rare, and there can never be too much of it. It is easy to make coins and bars from it, which today are no less in demand than hundreds of years ago. In the digital age, when savings may vanish with just one click, gold becomes especially compelling. It is an eternal value that has existed and will always exist. That's why millions of people use gold as a Financial Security tool to protect their savings from the crisis and the collapse of the banking system.

Rate this article:
Gold News
You May Also Like:
[VIDEO] What did little Luciano dream about, and where did it all lead to?
What’s the power of gold?
The New Victory of Gold: Russia
RELATED NEWS
The unquenchable thirst for gold in the Middle East
Another country has entrusted its economic future to the precious metal.
Is the race for cosmic gold starting this year?
Humanity is ready to take a step towards the exploration of gold deposits outside the Earth.
Asian giant against the crisis: what do people in China think of gold?
What do the latest data from the mighty Eastern power say?
Prospects of gold: a breather before a new leap?
Should we expect the conquest of new frontiers?
Nigeria creates a “gold springboard” for its economic leap
The precious metal as the foundation of the nation’s well-being.
Turkey builds gold muscles
The country’s policy towards the precious metal speaks volumes.
Egypt’s fascination with possibilities of gold
The people of Egypt have taken a fresh look at the precious metal.
Billionaires enter the battle for gold
The gold industry is in the spotlight.
Bankers: gold is the top asset of 2020
The grand successes of the noble metal astonished the whole world.
Where gold is heading to: expert opinions
A significant psychological barrier has been overcome. What’s next?
Take the test
and find out if you are exposed to the Lack of Financial Security virus.
Register on the platform to receive the test.