The rising power of gold 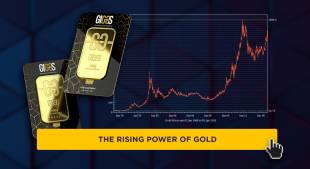 The World Gold Council* published a report, noting the growing popularity and strengthening of the position of the yellow metal. We suggest you to familiarize yourself with the main findings of this study.

A reliable means of accumulation

There are good reasons for this: the gold market is very large and liquid, while the amount of the precious metal is limited. Since 2001, demand for investment gold has been growing by 14% on average annually.

A product in demand

According to the study, one of the most important factors in boosting demand is the increase of well-being throughout the world. A striking example of this process — the countries of Asia, where the middle class is rapidly expanding. The share of India and China in world demand for gold in the early 1990s was 25%, today it is already more than 50%.

Central banks are also showing growing interest in the precious metal. After the economic crisis of 2008-2009, they changed their attitude towards gold and since then the buying volume of gold exceeds its selling volume.

According to experts, the total amount of investments in physical gold worldwide is $3.7 trillion. In 2019, an average of $145 billion was traded on the global gold market every day.

Inflation is manifested in rising prices or a decrease in the purchasing power of money. This happens when the rate of currency emission exceeds the rate of increase in available goods and services. As a result, each unit of goods has an increasing amount of money which is getting cheaper.

After the abolition of the Bretton Woods system* in the 1970s, the US dollar began to lose its purchasing power due to inflation. Many other currencies, connected with the US money in active international trade for decades, suffered the same fate.

As time has shown, the best insurance against this phenomenon was and still is gold. It had been established that in the years when inflation exceeded 3%, the price of the yellow metal increased by 15% on average.

The best of currencies

Over the past century, gold has surpassed all major currencies, demonstrating the greatest stability. Economic shocks knock fiat money* out over and over again, but gold remains invulnerable.

The advantage of the yellow metal is that its volumes available to people have increased very slightly over the past decades. At the same time, currencies were printed in huge quantities, which often led to their depreciation.

More than just a commodity*

Many people believe that gold is just a commodity, like crude oil, wheat or rubber. However, there are fundamental differences:

- Gold, in particular investment gold, does not wear out and cannot be destroyed in the process of use, it can last forever;
- Gold is not a niche product. It is used in many industries and is in demand by both large industrial enterprises and ordinary people.
- Yellow metal is both a luxury item and a financial tool, which only increases its popularity and contributes to rising demand.

The modern world is volatile and unpredictable. There are very few valuable assets, the reliability of which is undeniable. One of such assets is gold. The noble metal will preserve and accumulate your finances, ensure decent retirement and help your children enter into adulthood with confidence.

*The Bretton Woods system —  an international system intended to govern monetary relations and trade settlements (1944-1976). The main principle: the US dollar remains an international means of payment that is backed by gold.

*Commodities — goods or services that are actively resold in organized markets. Commodities have the following features: mass appeal, fungibility, the presence of a large number of sellers and buyers, free price system.