What is happening with the global demand for gold? 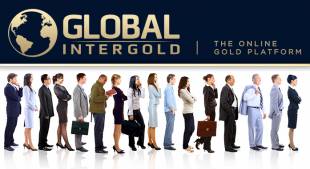 According to the World Gold Council*, last year, the global production of gold amounted to 3,347 tons, which is highest figure recorded throughout the entire observation period. The record-high gold mining activities resulted from the rapidly growing global demand for precious raw materials.

The top five leaders in terms of gold production are: China, Australia, the US, Russia and South Africa.

According to the last year’s report of the World Gold Council, the global demand for gold increased compared to 2017, due to the highest amount of gold purchases made by central banks of various countries over the past 50 years. The chart: the annual gold demand in 2018 increased by 4% due to record-high purchases made by central banks.

The tendency to increase the national gold reserves is caused by the desire of countries to stabilize the exchange rate of the local currency and reduce its dependence on the US dollar. Experts of the World Gold Council project a further increase in gold purchases by central banks.

The global sales of gold increase

The political and economic risks in the world are increasing, but thanks to the liquidity of gold, it is still considered the most reliable asset for protecting personal savings. Investors are interested in investing in a stable and the most promising asset of the 21st century.

The Mint of Australia (being the second country in the world in terms of gold production) reports an increase in sales of gold in January 2019 by 7% compared to last year’s December. The amount of precious raw materials sold in a single month was 0,88 tons.

A deficit of gold will affect its price

Gold is the most sought-after metal in the world. The global production of gold has increased significantly, but the reserves of gold on the planet are running out day by day. According to the commodity market experts, the peak of gold mining is expected to occur in 2019, followed by a decline.

Today, the exploited gold deposits are almost completely depleted, while the new ones are technically inaccessible given that such deposits are at great depths.

Financial experts are certain that the lack of new deposits and the resulting reduction in gold production will lead to a significant increase of the price of gold. The chart reflects the dynamics of gold mining activities by the leading countries in the gold industry.

The price of gold demonstrates a steady growth.

Financial analysts expect a breakthrough in the price of gold. Gold has every chance of showing its true potential, generating good profits in 2019.

The price of gold went up after the Federal Reserve System* signaled the suspension of rate hikes. The Fed's actions were a major supporting factor for gold, increasing its price by 3% in January 2019.

Views of experts on the price rally of gold*

Ole Hansen, the Head of Commodity Strategy for Saxo Bank, is confident that 2019 will be auspicious for gold and its price growth is rather obvious. The expert advises to pay attention to this promising and profitable asset.

Peter Grosskopf, Chief Executive Officer of the Canadian company Sprott Inc., emphasized the long-term potential of gold due to the growing sovereign debt throughout the world: "If you do not have gold in your portfolio yet, now is the time to add it."

Raw materials market experts have high hopes for gold, believing that its price will reach $1,400-$1,500 per ounce.

Gold is the ideal tool for wealth preservation.

IS THE WORLD READY FOR A GOLD DEFICIT?

* The World Gold Council — the market development organization, founded by the world's leading gold producers to stimulate demand for gold. The council is comprised of companies that account for 60% of all gold produced in the world.

* The Federal Reserve System — aka the Fed’s, is the independent agency that oversees the commercial banking system and acts as the central bank of the United States.

* The price rally of gold — the upward price trend of the precious raw material.