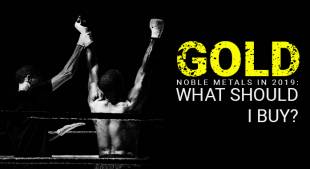 The global tension is growing, further aggravated by trade wars between the world powers, the impending withdrawal of the UK from the EU, the arms race. All this poses a real threat to national currencies. Frustrations over possible financial losses forced people to look for a better alternative to money. Lately, the market has been influenced by the strong dollar, but this year’s growing economic instability will urge the nation to pay attention to noble metals.

Which one is the best choice? Which one will generate more profit?

Let's review all the competitors.

In the summer of 2018, amid the strong dollar, gold had its ups and downs. However, in December 2018, the yellow metal began regaining lost ground. In 2019, this trend continues: in January, the price of gold hit a seven-month high.

According to experts, the US economic slowdown of 2019 is inevitable, which will only strengthen the positions of gold – the growing interest on the part of international central banks also plays a major role. Among the countries that stocked up its gold reserves in 2018 were Russia, China, Turkey, India, Kazakhstan, Poland, Hungary (data provided by the World Gold Council). The jewelry and technical industries demonstrated a steady growth in demand for gold: 6% and 2% respectively. Ordinary citizens, especially in densely populated China and India, are also keenly interested in gold.

The aforementioned circumstances will ensure the growth of gold in 2019. Analysts of Goldman Sachs, Bank of America, Bloomberg, Merril Lynch and Commerzbank feel sure about the success of gold.

Commerzbank gives the most optimistic forecast for 2019: the price of gold will reach $1,500 per ounce.

It has been a rough year for silver. A relatively low level of investor interest caused silver prices to fall by more than 13%.

As of today, the production of silver is in decline, investments in the mining sector are reduced. There’s been an oversupply of silver on the market, which is far exceeding the demand from investors and industrialists. Over the past ten years, investors have acquired only a quarter of the total amount of silver offered. According to Walter Pehowich, the executive vice president of Dillon Cage Metals, the surplus of silver is hard to sell. Given that silver is a cheap metal, people perceive it as a raw material, rather than a tool for capital preservation.

The credibility of silver is also undermined by the low transparency of its market. The system of accreditation and legalization of silver is less advanced, lagging behind gold, so it is often quite difficult to determine the origin of the metal. For this reason, it makes silver a highly volatile commodity.

Julius Baer gives the most optimistic forecast for 2019: the price of silver will reach $17 per ounce.

Over the past year, platinum suffered the greatest losses, falling by nearly 16% as the result of the aggressive US trade policy. The price of platinum is highly dependent on the automotive market. The risk of countervailing import duties on cars imposed by the US and the EU has scared most investors away.

A reduced demand for diesel cars dealt a serious blow, since platinum is mainly used in the manufacture of catalysts for diesel engines. In 2015, the Volkswagen scandal broke out, the so-called “Dieselgate”, which demonstrated the harmful effect of diesel vehicles on the environment.  Since then, a campaign against obsolete engines has been launched around the world. The transition to more environment-friendly mode of transport will adversely affect the platinum sales in 2019. Platinum is not a high liquid asset, it is harder to trade it in comparison to gold. The share of platinum in the jewelry industry is rather insignificant, accounting for 30% of the total demand.

TD Securities gives the most optimistic forecast for 2019: the price of platinum will reach $1000 per ounce.

In 2018, palladium demonstrated a positive trend, having been facilitated by the growing demand from car manufacturers, as well as the transition from diesel to gasoline engines, in the production of which palladium is widely used.

Heavy reliance on the automotive industry can become the biggest point of vulnerability for palladium. Rohit Savant, Director of Research at CPM Group, foresees a downturn in the American and Chinese automotive markets, which in turn can be a serious deterrent to palladium prices. Savant also notes that due to the high price of palladium, car manufacturers plan to replace it with a cheaper compound in the near future. This means that the prospects of palladium as a long-term asset are very vague.

Citigroup Global Markets Inc. gives the most optimistic forecast for 2019: the price of palladium will reach $1,175 per ounce.

Read more about gold forecasts for 2019