Even more gold for central banks! 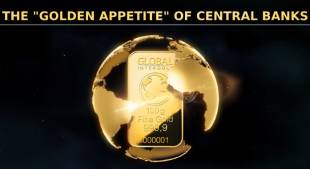 The "golden appetite" of central banks worldwide has been increasing. In 2018, 651 tons of gold were purchased – 74% more than last year.

What is the reason for the central banks’ ever-increasing craving for gold? Why is the precious metal so important for the state reserves?

Backup for the national currency

Despite the official abandonment of the gold standard*, countries want their national currencies to be backed by something of a tangible value. A solid gold reserve makes the currency more stable and credible within the international market.

Safeguard against economic and geopolitical threats

In the event of a financial crisis, trade war or armed conflict, gold helps stabilizing the economy, limiting the impact of sanctions and preventing the collapse of the national currency. 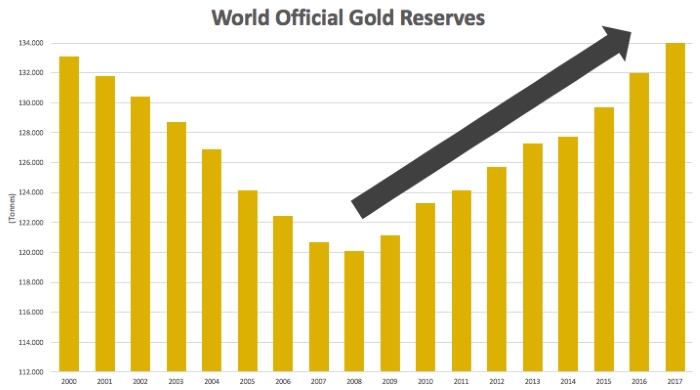 In the chart: after the financial crisis of 2008 took the world by surprise, countries began stocking up their gold reserves (data provided by the World Gold Council*).

The domestic gold purchases by central banks serve as an effective way to support local producers, bolstering the state’s economy.

Given the universally recognized value, gold remains an integral part of the culture in many countries. Vast gold reserves constitute an effective moral support for the holder while being a real confidence booster.

In recent years, some countries (for example, China and Russia) have sought to undermine the dollar’s dominance over its financial systems by reducing the US dollar's share of currency reserves and opting for gold instead.

Top 5 leaders of the gold race

More than half of the US gold reserve is stored on the territory of the Fort Knox military base – one of the most protected places in the world. Even the country’s president has no access to the depository. 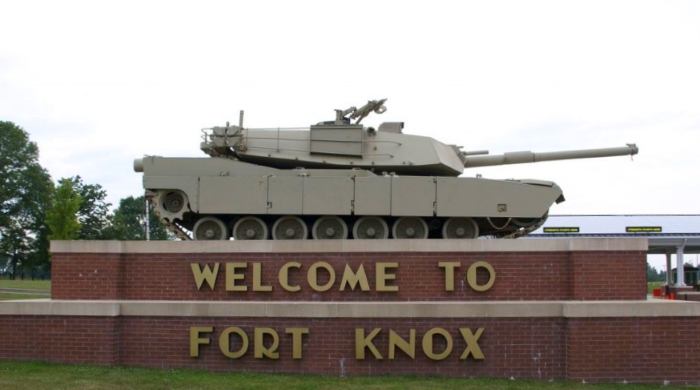 In the photo: “Welcome to Fort Knox,” reads the inscription under the tank. The US gold reserves are under military guard.

Not long ago, most of the German gold was stored abroad. However, in 2013, public opinion prompted the government to repatriate its gold. Today, 50,6% of the country's gold reserves are held by the Federal Bank of Germany (Deutsche Bundesbank).

The Italian gold reserve is one of the most stable in the world and has remained virtually unchanged over the past 20 years.

The gold of France is stored in the Paris vault La Souterraine, located at a depth of 28 meters underground. If necessary, three thousand people can take shelter in the premises.

Lately, thanks to the record purchases of gold, Russia got ahead of China in terms of the gold reserve, ranking fifth in the top. Since 2000, the amount of gold in the country's central bank has increased by more than 500%.

The unstoppable price increase fuels the interest of central banks in gold. The difficulties experienced by the global economy are pushing the price of gold up. Bank of America analysts project that it may soon reach $2,300 an ounce. 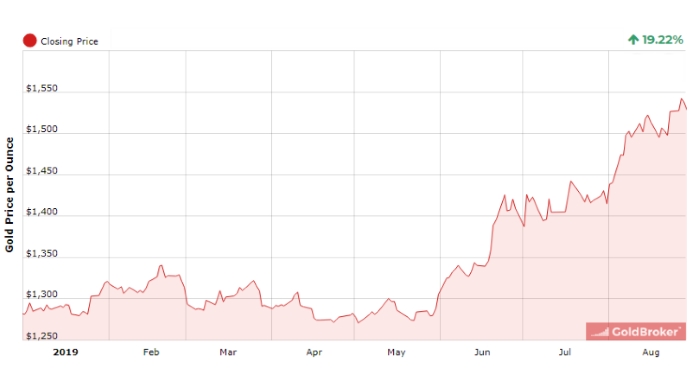 In the chart: the gold price dynamics since January 1, 2019.

Amid economic uncertainty, the importance of gold as a reliable reserve asset and a guarantee of Financial Security cannot be overstated. History proves that the noble metal makes a major contribution to overcoming the crisis, therefore, the leading countries of the world turn to gold to strengthen their positions.

HOW DOES GOLD SAVE NATIONS?

*The gold standard — a monetary system in which each economic unit of account (national currency) is based on a fixed quantity of gold. For example, the US twenty-dollar bill ($20) was equivalent to one ounce of gold (31,1 grams) in 1928.