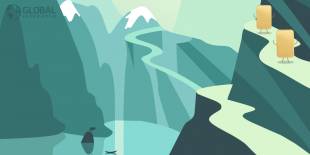 Learn from our report how political instability affects the gold market.

This week, the price of precious metals was not stable due to the tense situation in the world.

Prior to the upcoming Fed’s meeting, experts at the Russian Sberbank KIB predicted:

"If in the near future there are no new reports on the escalation of the conflict with North Kores, the decision of the US Federal Reserve may lead to a drop in gold prices this week below $1,300 an ounce".

Investors took a pause before an important speech by the US President at the UN General Assembly; so, on Tuesday 19th, gold prices stopped at $ 1309.

The US leader Donald Trump used his strongest words at the 72nd UN General Assembly session:

“The US has great strength and patience. If it is forced to defend ourselves or our allies, we will have no choice but to totally destroy North Korea”.

The atmosphere in the political arena got denser as the North Korean Foreign Minister Lee Yong-ho called Trump's speech "a dog barking".

After the Fed meeting, the US currency strengthened noticeably, which led to a slight decrease in the cost of the yellow precious metal to $1,299.

“The actions of the Federal Reserve are always one of the main factors determining the changes in the financial markets“.

On Thursday 21st, the market was under the influence of Fed statements. It was no surprise that the Federal Reserve decided to keep interest rates and not to make any changes. Until the end of this year, rates will remain at annual level of 1-1.25%, a possible hike is planned not sooner than in December.

“Of course, our decisions always depend on the degree to which incoming data continues to confirm the committee’s outlook”.

Many economists consider Yellen's statement as very predictable. As a rule, the dollar increases after each Fed’s meeting.

“Yellen is banking on the theory that an economy at full employment eventually leads to greater inflation. Too-low inflation is probably not the thing that concerns an old hand like Yellen with decades of experience watching inflation rise and fall”.

The cost of gold against the background of Fed Chairman statements began to decline, reaching $1,290.

On Friday 22nd, the political situation heated. The head of North Korea, Kim Jong-un, sharply responded to the words of the American President, calling him "the hooligan and the gangster playing with fire, but not the politician”. Against the backdrop of this insulting policy, investors started buying the yen, while the dollar slightly lost its stability. Gold prices rose to $1,296.

After a busy weekend on Monday 25th, the euro began to lose its positions. The decline in the European currency was influenced by the victory of the Christian Democratic Union in the Bundestag elections. Angela Merkel won a hard fight and became the Chancellor for the fourth time.

"We have been fighting for Germany where we would live well, so now we need to lay the foundation for this to accomplish in 5-10 years".

Experts keep monitoring the situation on the stock market. They argue that in the period of political turbulence, gold will maintain its stable position. In 2018, a gradual increase in the cost of the precious metal is forecasted.

Keep an eye on the gold market together with us.