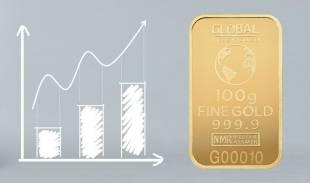 The crash of the stock market in Russia, the military attack on Syria and the invariably shocking Twitter statements of the U.S. president impacted the price of gold. Find out the details in our article.

The week began with the collapse of the Russian stock market. The imposed U.S. sanctions against 26 people deprived the richest people of the Russian Federation of 12 billion dollars. They are banned from entering the territory of the U.S. and might face assets freeze. 15 leading companies of the country were penalized. As a result, shares of these companies depreciated.

The U.S. Secretary of the Treasury Steven Mnuchin:

"Russian oligarchs and elites who profit from this corrupt system will no longer be insulated from the consequences of their government's destabilizing activities."

In just one day, 9th of April, businessman and billionaire, the president of United Company Rusal and En+ Group Oleg Deripaska lost $1,3 billion. The owner and president of one of Russia's largest companies “Interros”, a shareholder of “Norilsk Nickel” Vladimir Potanin lost the same amount of money.

Read the article about the stock market crash.

On Tuesday, 10th of April, the dollar grew rapidly after the speech of Chinese President Xi Jinping at the Asian Economic Forum in Boao.

The head of PRC noted that the country intends to lower tariffs on imported vehicles and expand the import of competitive goods needed for the people of China.

"We hope that the developed countries will stop imposing restrictions on normal and reasonable trade of high-tech products and ease export controls on such trade with China. " On Wednesday, 11th of April, the FED published the minutes of the Committee meeting on open market operations that occurred in March. As a result, the forecasts for 2018 cleared up. All 15 members of the Committee consider this year’s interest-rate hikes to be reasonable. According to Federal Reserve’s experts, the tax legislation changes will boost the economic growth.

The morning tweet of the President of the United States has aggravated the already tense situation on the market. Donald Trump spoke about the possibility of a military strike on Syria giving rise to the gloomy mood of market participants.

On Wednesday, the price of an ounce of the precious metal increased up to $1,353.

On Thursday, 12th of April, the price of gold was in correction, owing to the stable position of dollar.

Remarks of cryptocurrency fans that "gold is dead" seem outrageous in 2018, especially after the price of bitcoin almost dropped by 70% over the past four months, said John Ciampaglia, CEO at Sprott Asset Management, adding that gold is an asset that deserves the status of "immutability."

The expert noted, that the main reason why investors have always preferred gold is that it serves as a protection against the risks.

On Friday, 13th of April, the Head of the Federal Reserve Bank of Minneapolis Neel Kashkari said that the FED does not intend to keep low interest rates so that the government could reduce the amount of debt obligations. The national debt of the USA has reached $21,1 trillion, hence the need for an additional state financing.

On Saturday, 14th of April, the Armed Forces of America, Britain and France conducted military action against Syria. The stock market immediately responded: the Dow Jones index fell by 89 points, the U.S. dollar lost its positions, and the price of gold soared. The yellow metal is a protective asset, therefore, in case of aggravation of conflicts and the beginning of military action, the interest in gold grows and prices go up. The missile strike falls into that category of risks that strengthens the position of the precious metal instantly.

The trade dispute between the United States and China, a possible missile attack on Syria - all these issues remain unresolved. Most likely, the settlement of these problems will affect the price of the yellow metal in the near future.

According to senior analyst at Price Futures Group Phil Flynn, the tension is gaining momentum because of the uncertainties surrounding Syria and possible Russian counter-sanctions against the United States. Gold will benefit from it next week.

Create your own gold reserves!