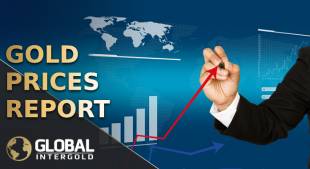 Analysts expect the further growth rate of gold prices, given that market participants wait for the Federal Reserve System decision on the monetary policy prospects.

Experts note the triumph of gold that has reached the highest level of $1,254 per ounce for the first time since July 17, 2018.

According to Jasper Lawler, Head of Research at the investment company London Capital Group (LCG), a change of the British Prime Minister Theresa May’s plans could entail political chaos:

“In 2016, Brexit helped gold. If this deal with the EU is voted down in the UK, that would open all sorts of political uncertainty, and we might see British investors turning to gold as a safe haven.”

On Tuesday, representatives of The Ministry of Commerce of China stated that trade negotiations with America would be resumed. The US Trade Representative, lawyer Robert Lighthizer set a deadline – Washington and Beijing must reach the deal by March 1.

The Prime Minister of Great Britain Theresa May has postponed Brexit deal vote, prolonging the transition of leaving the EU. Parliamentary vote has been delayed until the PM’s talks with the EU leaders on the backstop arrangements for the Northern Ireland border are over.

In November, 27 countries endorsed the draft agreement on the UK's withdrawal from the EU, suggesting Britain to sign the approved document.

On Tuesday, December 11, the European currency lost its positions, while the cost of gold was $1,243 per ounce.

Industrial and Commercial Bank of China (ICBC) outlined the following in its gold market review: Gold was supported by the confidence of the Conservative party entrusted to the British Prime Minister Theresa May, who remains the party’s leader. Political observers believe that May "jumped over a low bar" with many obstacles still ahead. The fate of Brexit depends on the premier’s actions. On Thursday, this year’s last meeting of the Governing Council of the European Central Bank was held, followed by a decision to maintain zero-interest rates until the summer of 2019. In an interview with Kitco News, Phillip Streible, Senior Market Strategist at the US company RJO Futures Inc., was optimistic about the stable strengthening of gold:

"I think the positions of gold have strengthened."

BMO Capital Markets analysts believe that "volatility and geopolitical risks will have a positive effect on gold."

The purchase of gold is your step towards Financial Security!