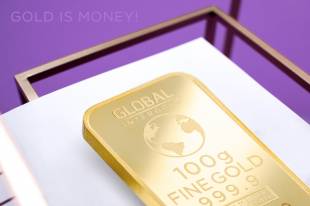 We explain why the demand for gold grows.

On Tuesday, 13th of February, the U.S. currency was under pressure due to the restored stability of the world stock market. The weakening of dollar was marked by promulgated data regarding the U.S. external debt load increase.

On Thursday, 15th of February, U.S. dollar has weakened even more, while gold continued to grow.

Two of the world’s most powerful leaders agreed to pursue exert pressure on North Korea. During a telephone conversation, the President of the United States Donald Trump and Prime Minister of Japan Shinzo Abe discussed joint action plan against DPR Korea. Political tension and macroeconomic factors have influenced the price increase of gold.

"What sparked the move of gold price today is the increase in inflation. I think that is boosting inflation expectations, and it gives a clear indication of what the Fed is going to do this year."

On Thursday, the price of the precious yellow metal amounted to $1,353.

On Friday, 16th of February, Chief Editor of the news bulletin The Gartman Letter noted the significance of this week for gold. Dennis Gartman highlighted the role of China as the main consumer of gold on the global market during the public holiday season.

D.Gartman, Publisher of The Gartman Letter:

According to the World Gold Council, 306,4 tons of investment gold were sold in China in 2017. Last year, the demand for gold has increased by 8% in China.

The “Golden Week” continues in full swing, as Chinese citizens contribute to the growing demand of the yellow metal. It’s a gift-giving time and long-lasting weekends.

On Monday, 19th of February, dollar continued to be under pressure. The state of the US currency was influenced by various factors: the Fed's policy tightening, politics of Washington, the US budget deficit.

"Inflationary alarms and fears about financial and the US trade deficit will keep the dollar in a defensive stance."

Against the backdrop of the defensive actions of buyers to strengthen the US currency, gold was worth $1,347 per ounce.

According to Saxo Bank experts, markets are currently very much preoccupied with volatility in the equity space. As a matter of fact, many investors are overlooking serious geopolitical risks that push gold prices up.

Analysts at the American bank Goldman Sachs rethought the value of gold, outlining new forecasts. According to bankers, gold prices will soar, rising up to $1,450 an ounce in a year. As stated by analysts, the rise in gold prices is derived from the fact that investors will strive to secure their capital and protect investments from depreciation. In this case, only gold can provide the back-up support.