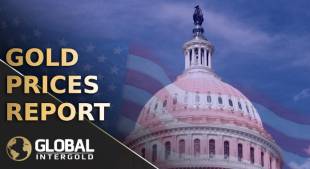 The voting results of the US elections will undoubtedly impact the governmental policy and economic situation worldwide.

On Monday, November 5, the standoff between Republicans and Democrats intensified. Some experts foresee Donald Trump's impeachment.

Amid political tension, analysts once again reaffirmed the growth of gold.

Bloomberg Intelligence (BI) experts stated that “the time of gold has come.”

On Tuesday, November 6, the dollar weakened due to investors' caution ahead of the midterm elections in the United States. The upcoming Federal Reserve System (Fed) meeting also affects the US currency's positions. The Fed plans to keep interest rates unchanged in November, postponing the increase to December. In 2019, interest rates will double.

On November 6, Americans took part in the US senate election voting, selecting the next state governors and members of the House of Representatives.

On Wednesday, November 7, the Democrats were in the lead according to the US midterm election results. The victory provides an opportunity for the majority in the House of Representatives to examine income tax declarations of President Donald Trump and appeal  against his trade policy. The midterm election results impacted the cost of gold. On Wednesday, an ounce of gold cost $1,226.

On Thursday, November 8, prior to the Fed’s two-day meeting, the dollar has strengthened its positions.

Economists insist on the minimal changes in the Federal Reserve System policy, but market participants are still waiting for forecasts on the US monetary policy.

Experts view the results of the US elections as positive, since the distribution of political forces will contribute to the state’s future economic growth, smoothing the rough edges of a trade policy. In the photo: Democrats represent majority in the House of Representatives, while Republicans have strengthened their control over the Senate.

On Friday, November 9, the US currency strengthened due to the Fed's stance on the monetary policy tightening. In 2018, the Federal Reserve have raised interest rates three times, they remained unaffected in November, but another increase is expected in December.

“The Committee expects further gradual increases in the target range for the federal funds rate.”

Venezuela cannot reclaim its gold bars stored in the Bank of England.

Hugo Chavez initiated the process of gold repatriation seven years ago, and the current president Nicolas Maduro continues his work. The gold reserve of Venezuela – 164,2 tons of gold, 14 tons of which are stored in England.

In early November, Donald Trump spoke out against allowing Venezuela to steal wealth for corruption purposes. In response to the actions of the US President, the Head of Venezuela N. Maduro spoke about his intention to increase the production of gold.

Financial experts of the Natixis bank in Paris predict an increase in the price of gold against the background of the weakening dollar. The report states that by 2019, a gold ounce will cost $1,275, and by 2020 — $ 1,300.

Over the next year, gold prices will increase by 7%, according to Wells Fargo analysts. According to financiers, an increase in the price of gold to $1,350 by 2019 is not a short-term one.

Gold is an asset protection at all times.

PRESERVE AND ACCUMULATE – PRINCIPLES OF PROTECTION.