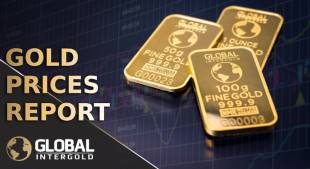 On Monday, October 8, the contradictions between the two major powers has toned down. The leader of North Korea Kim Jong-un and the US Secretary of State Michael Pompeo have agreed to hold a summit on denuclearization.

Raphael Bostic, President of the Federal Reserve Bank of Atlanta, believes that a neutral policy should be adopted. Keeping one’s foot on the gas pedal or pumping the brakes, according to Bostic, won’t do any good. Confrontation between Italy and Brussels persists. On Tuesday, October 9, the conflict escalated because of the statement made by Deputy Prime Minister of Italy Matteo Salvini, who called the President of the European Commission an "enemy" of Europe.

According to International Monetary Fund analysts, weak economic indicators of the Eurozone, trade policy tensions and sanctions are likely to slow down the economic growth in 2019.

On Tuesday, against the background of the growth of the European currency, an ounce of gold cost $1,190.

On Wednesday, October 10, Mohamed Aly El-Erian, chief economic adviser at Allianz, warned that the European Central Bank would shift the deadlines of interest rate raise. According to the analyst, 19 EU countries remain in a state of great vulnerability due to trade tensions, inflation and monetary policy. El-Erian predicts a rate hike to occur in the summer of 2019.

Sabrin Chowdhury, commodities analyst at Fitch Solutions, stated that gold would struggle to rebound over the remainder of 2018.

On Thursday, October 11, the market was disrupted by Donald Trump's critical statements regarding the actions of the Federal Reserve System (Fed). The US president noted that the "crazy" Fed should be blamed for the stock market fall, since the central bank continues to raise rates. Secretary of the Treasury Steven Mnuchin and IMF Director Christine Lagarde believe that "nothing surprising has happened."

A slowdown of the global growth affects the price of gold. On Thursday, an ounce of the precious metal cost $1,224.

On Friday, October 12, the strengthening of the European currency, based on the protocols of the European Central Bank, continues to progress. Germany’s Minister of Finance Olaf Scholz thinks that relations between the US and the EU are of no concern, since the intensification of a trade conflict is not provoked.

The dollar fluctuates, the price of gold increases.

Analysts believe that gold has overcome resistance and now can demonstrate a strong growth. Guided by confidence, investors turned their focus to the yellow metal once again, confirming the value of gold as a safe asset.