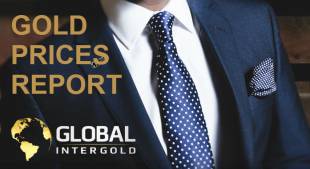 "Factors depend on interest rates and concerns that rates will continue to rise," Holmes said in an interview with Kitco News.

Experts note that physical gold wins due to the fact that sales of gold usually increase in autumn.

The festive season begins in India and Qatar. Gold is closely linked to the cultural and national traditions of these countries. In this regard, people started to buy jewelry a lot more often.

Long-term investors must not overlook the favorable position of gold, acknowledge experts of the Californian banking company Wells Fargo.

Analysts believe that gold will retain the price of $1,350 per ounce for a period of twelve months.

According to experts, the dollar will lose its power until the end of the year. This, in turn, should support the price of gold.

"In our opinion, for long-term investors, the accumulation of gold now looks like a worthy deal," - concluded the representatives of Wells Fargo.

On Wednesday, 12th of September, President of the European Commission Jean-Claude Juncker proposed European Parliament to reduce the EU calculation in dollars, and vice versa — to increase euros. Thus, the role of the euro on the international market has been reinforced. In the photo: Juncker noted that euro currently is the second largest currency in the world.

The head of the European Commission Jean-Claude Juncker:

Against the backdrop of the growth of the euro, gold has strengthened its position.

On Thursday, 13th of September, the dollar was under pressure after the White House announced its readiness to resume negotiations with China.

On the same day, a meeting of the European Central Bank took place at which the ECB President Mario Draghi spoke on the regulator's policy. The head of the ECB announced a decision to keep interest rates at the same level till summer 2019. In the photo: At a press conference, Mario Draghi noted that the risks of the eurozone can be considered balanced.

On Friday,14th of September, there were reports regarding the US readiness to begin a new stage of negotiations with China. State Councilor Wang Yi spoke about the need of implementing effective reforms of the World Trade Organization. In the opinion of the councilor, the WTO could take into account the views of developing countries in its work.

The instability of the economies of many countries, the crisis in Turkey and Venezuela have an impact on the price of the yellow metal.

“Finance fears have re-surfaced, and we believe that ultimately they will prove to be supportive for gold,” said Rhona O’Connell, head of Metals Research for GFMS division of Thomson Reuters. According to WGC official data, the world gold reserves make up 33 763,6 tons. China was the world's dominant gold producer in 2017.

In this country, gold mining accounts for 13% of the total world production.

Robert Kiyosaki, the author of the world's best-selling books, regards gold as the only form of currency that, in his opinion, is "authentic".

A new book by the famous entrepreneur and writer Kiyosaki "FAKE: Fake Money, Fake Teachers, Fake Assets" comes out in April 2019. In it, the author talks of gold, referring to it as the God’s money.

Kiyosaki notes that there’s no such a scenario, following which he would give up his gold reserves.

Accumulate your savings in gold!