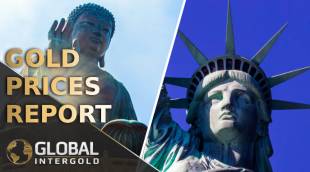 The week began with reports that negotiations between America and Canada did not lead to a positive result. In addition, China can take another step — refuse to negotiate on trade issues with the United States. On Monday, Donald Trump set 10% tariffs on imports of goods from China. The newspaper Global Times reported about the intention of Beijing to go into a counter-attack.

Justin Lin Yifu, a professor of economics at the National School of Development in Peking University, said that China’s growth potential remains huge, since the country has great scope for innovation. Xi Junyang, a finance professor at the Shanghai University of Finance and Economics, said that bilateral trade tensions will increase the downward pressure on the domestic economy of the country.

The Ministry of Foreign Affairs of China confirmed that the escalation of the trade conflict does not reflect anyone's interests.

On Monday, 17th of September, amid trade relations worsening, an ounce of the yellow metal was worth $1,201.

On Tuesday, 18th of September, the trade war between Beijing and Washington worsened. In the photo: TRADE WAR: Trump threatens another $200 billion in more tariffs against China.

Starting Monday, 24th of September, the tariffs will take effect. With the beginning of 2019, tariffs will increase from 10% to 25%. Sanctions cause enormous economic damage to those countries in which the White House imposes restrictions. The actions of the US government against Iran led to a depreciation of the national currency - rial - by 60%. The decline in oil exports by 35% contributed to an increase of inflation in Iran.

On Tuesday, the price of an ounce of gold approached the $1,198 mark.

On Wednesday, 19th of September, experts noted the stabilization of the gold market. Analyst of the British company Metals Research & Strategy Boris Mikanikrezai is confident that the potential for lowering prices of the yellow metal is limited.

Many specialists witness the positive dynamics of gold position’s strengthening, declaring that the precious metal has every chance of finishing the year on a strong note.

The Financial Times wrote that the trade war between Beijing and Washington reached the full-scale stage. China announced the introduction of countermeasures against Washington, referring to the $60 billion US-imported goods.

CEO of Alibaba Jack Ma believes that the war will cause global problems around the world. According to his prediction, the aggravation of relations may last at least two decades. In the photo: The head of Alibaba Jack Ma called the relations between the two countries a "mess."

On Thursday, 20th of September, the fifth inter-Korean summit ended in Pyongyang. During the three days of negotiations, it was decided to resume consultations with the United States with the intention to finalize the nuclear issue. Next week, the Foreign Minister of North Korea will meet with US officials to discuss the issue of the denuclearization until January 2021.

The resumption of negotiations positively affected the price of gold. In addition, experts predict that there are all prerequisites for the precious yellow metal to avoid the pressure. If next week, the Fed raises interest rates, analysts' forecasts will be proved to be true.

On Friday, 21st of September, the market tension eased. Everyone is fed up with the everlasting tension between China and the United States and stopped overreacting.

The announcement that Japan and America will hold talks on trade issues on Monday has stabilized the situation. On the 26th of September, a meeting will be held at the highest possible level between the Japanese Prime Minister and the US President. The leaders intend to settle for a win-win option to tackle all controversial issues.

Saxo Bank specialists note that trade wars caused a moderate increase in the price of gold. Strengthening the countermeasures by China can cause aggravation of economic relations. ING Bank Dutch analysts forecast an increase of risks for the global economy, if the scenario proves to be true. According to experts, gold remains a safe harbor, which enables to protect against global crises and the collapse of stock markets. A lot of people are inclined to believe the fact that gold will make a drastic change of course soon, and the precious metal market will be revived.

Gold is a protective asset for your Financial Security.