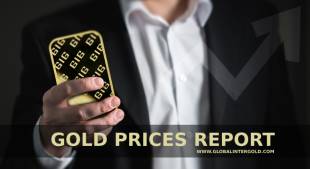 On Monday, 20th of August, the German daily newspaper Die Welt reported on Russia's increase of gold reserves. The Russian Federation ranks fifth in the world in the sphere of gold mining. 17% of the world's precious metal reserves are stored in the country.

Economist James Rickards noted that the yellow metal is an ideal protection against the US sanctions. Perhaps, this explains the increased amount of precious metal’s purchases: The Central Bank acquired 840,000 ounces of gold last month.

According to the Central Bank of Russia, as of the 1st of August, the volume of yellow metal stocks amounted to 1970 tons worth of 77,41 billion dollars.

On Monday, the price of an ounce of gold increased, reaching the $1,211 mark.

On Tuesday, 28th of August, the market revived, positive sentiments emerged due to the easing of tension between the US and Mexico. The countries reached mutual understanding on the future of trade relations. The parties intend to disclaim the name of NAFTA and are ready to start using the "US-Mexico Agreement" in the near future.

As a result of these major changes, the national currency of Mexico (peso) has grown sharply. The dollar has become more stable against other currencies. In the photo: The teleconference of the American Head of State Donald Trump with the President of Mexico Enrique Peña Nieto.

The ability of Trump to handle negotiations was immediately regarded by analysts as a positive opportunity for the growth of gold. If the US agreed with Mexico, then why not reach an agreement with China?

"If we see a resolution between the US and China, that will go a long way to stabilize the yuan, which will help gold prices," notes Maxwell Gold, Investment Strategy ETF Securities Director at Aberdeen Standard Investment.

According to M. Gold, the prices of the precious metal should soon stabilize.

As we have already told, a denomination began in Venezuela. Due to the plight of the country, 2 million people moved away. Five zeros were lopped off its national currency. In order to save the situation in the state, the President of the Bolivarian Republic of Venezuela Nicolas Maduro addressed the citizens of the country with a statement in which he acknowledged the most important value of gold in the world. He allowed the population to store their savings in the precious metal starting from September 11. The price of a gold bar, whose weight is 1,5 grams, will amount to 3780 bolivars, and the price of gold bars weighing 2,5 grams will be 6300 bolivars. In the photo: President of Venezuela Nicolas Maduro believes that gold will help to survive the crisis.

On Wednesday, 29th of August, the price of gold on the global stock markets was $1,206 per ounce.

On Thursday, 30th of August, the market was optimistic because of reports that the US and Canada could reach an agreement on free trade issues. This fact has strengthened the dollar’s position.

The largest states have sped up the process of mutual agreements after America and Mexico have made a trade deal. If this week the United States will reach major agreements with its main partners, it will have a positive impact on stock markets.

CNBC informs that a coup against the dollar might start in the near future. According to the TV channel reports, every fourth citizen on the planet lives in a country that dreams of the US currency global supremacy end.

On Friday, 31st of August, negotiations on NAFTA were resumed. The US President Donald Trump considered the previous obligations between Washington and Ottawa unprofitable, and therefore heavily promoted the revision of the Free Trade Agreement. Previously, Trump noted that if he doesn’t agree with Canada, he will settle for trading agreements with Mexico. Due to the expectations of the agreement to come into force, the financial markets of the three countries have grown significantly.

At the beginning of the week, 3rd of September, an ounce of the precious metal was worth $1,201 per ounce.

Specialists at the German Commerzbank believe that the precious yellow metal will regain its positions, reaching $1,300 per ounce by the end of 2018.

"Gold fell in price amid some geopolitical changes. Those were the depreciation of the Turkish lira and the US trade war. Nevertheless, the analysts of the bank emphasized, when the global crisis hit in 2008, and the precious yellow metal initially lost nearly $200, then it soared, rising from $700 to $1200 by December 2009. And by the end of 2010 — up to $1,400 per troy ounce."

The German bank notes that the downgrade game that we witness in the work of investment funds will ultimately lead to an increase in the price of gold. It is already poised for a quick rally.

"All that it needs is a trigger or a turnaround event. Such a turn may be a correction on the equity market or a depreciation of the dollar,"  the German experts acknowledge.

Gold does not lose its value.

Global InterGold is your Financial Security.