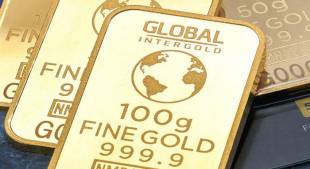 Gold price forecast from the experts for the year 2018.

According to analysts, the global demand for gold is likely to increase in the coming year.

Imports of precious metals increased by 1.6% in India last year. The demand for gold bars in China soared by 40% in November 2017, compared with the same period in 2016.

A weakening of the dollar alone can subsequently lead to gold price breakthrough in 2018.

At Tuesday, 9th of January, America’s native currency was supported by the U.S. Treasury Department. The FED’s restrictive policy prevents dollar prices from the further decline.

Trade investors were concerned about the current position of the UK and with the decision of country’s leader Theresa May to exit the EU block without proposing a trade deal.

Joan Hoey, Regional Director for Europe at the Economist Intelligence Unit (EIU), sees a logical pattern reflected in the actions of the British government.

“If the EU is not able to propose an acceptable deal, the British government has to prepare wisely for the possible outcome. In such a case, the Secretary of State responsible for the United Kingdom's withdrawal from the EU should be involved.”

Theresa May’s intention is to appoint a new Secretary of State for Exiting the EU (Brexit Secretary) in due course.

On Wednesday, 10th of January, analysts at the Canadian Imperial Bank of Commerce (CIBC) issued a positive projection regarding the outlook of euro for 2018.

“The production index is accelerating, reaching nearly a record high. In this regard, we believe that the EUR/USD and EUR/GBP pair correlation tendency remains firmly positive till the end of 2018.

Stephen Innes, the Head of the OANDA’s Trade Division in Singapore, suggested that the actions of investors might become less risk-taking.

Michael Shaoul, the Chairman, and CEO of Marketfield Asset Management:

“This is not a good direction for the bond market, which is under pressure already.”

The price of yellow metal amounted to $1,318, rising up on Thursday.

On Friday, 12th of January, the dollar’s falling continued. The EU currency has grown due to the situation in Germany. Chancellor Angela Merkel is ready to initiate negotiations with SPD (The Social Democratic Party of Germany).

"This coalition agreement should change the situation with the German’s federal parliament, which currently loses its edge, that explains why the EU currency rose strongly against the dollar.

It is planned to endorse the agreement on the revival of the "Great coalition" on 21th of January.

In addition to that, ECB's analysts indicated their intention to reduce the monetary stimulation incentive.

On Monday, 15th of January, the price of the precious metal reached $1,342. The price of gold surged on the eve of the meeting of the European Central Bank on the 25th of January.

Vine Lanci, founder of the investment company Echobay Partners predicts the yellow metal price increase up to $1,700 per ounce.

"I anticipate that the price of gold in the coming 12-18 months will grow significantly.Gold price market rally might continue, and the value of precious metals could grow by yet another 100 dollars in the coming 3-6 months.”

Analysts from the Swiss financial holding UBS Group AG said that its gold price forecast for year-end 2018 stands at $1,325 per ounce.

“Higher inflation coupled with a weakness of the dollar will push the price upwards.”

Other evidence to support a bullish engulfing view is that gold remained strong in 2017 despite the U.S. stock market surging to record highs and interest rates rising three times.