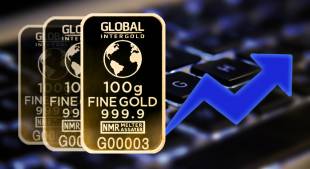 The situation in Italy excited the market and became the topic number 1 for those who are worried about the "divorce" with the EU.

The political events in the south of Europe attracted the attention of the world community, as the opportunity to leave the Eurozone became more real. Experts fear that the new "populist" government can take a confrontational stand on key EU issues, such as financial discipline and migrants.

Brunello Rosa, economist and strategist, CEO of Rosa & Roubini believes that in this turbulent situation, "gold will remain an important component of diversified portfolios ...".

Analysts and economists continue the discussion on the consequences of the signing by US President Trump of the decree on the introduction of duties.

A trade war can break out of control and lead the world to economic collapse in the scale of the Great Depression of the 1930s, John Doody, the founder of the Gold Stock Analyst agency said.

On Tuesday, July 17, Sotheby's announced its first auction in history dedicated to gold. Bidding was decided to hold in connection with the growing demand for yellow metal.

The auction will feature historical artefacts and precious metal furniture.

Senior Director of Sotheby's and Head of Sales Constantine Frangos:

"Gold has always been a universal symbol of status and has great historical significance. Investors from Asia, Russia and the Middle East contributed to the resumption of demand for gold products. "

The exclusive Sotheby's event will be held on October 17 in London.

The price of yellow metal on Tuesday was affected by a sharp increase in the US Dollar.

American lawyer, Chairman of the Federal System, Jerome Powell made a speech before the US Congress. He noted that aggressive fiscal policy is bearing fruit and raising interest rates will lead to further economic growth. In the photo: Head of the Federal System Jerome Powell found an excuse to stir up the financial market during the summer calm.

On Wednesday, July 18, analysts relying on the results of the monthly survey of Bank of America Merrill Lynch's (BAML) noted that it's time to buy gold.

"Jerome Powell ... suggested that the US economy is strong ... Powell's comments raised the US Dollar index to its daily high."

Jim Kramer, presenter of the show Mad Money on CNBC:

"I always think that people should have gold. I like gold and ingots! " In the photo: Jim Kramer, TV presenter on CNBC, never tires of repeating that gold has always had and has its own value.

On Thursday, July 19, the value of the US Dollar remained high, but quotes on Wall Street increased sharply. Changes in the market were caused by the speech of Jerome Powell in Congress.

Analyst Michael Pento believes that the crisis is inevitable. According to the investor, the situation may worsen by October 2018. Pento advises sane people at least 10% of their savings to be stored in gold and stocked in investment bars.

The cost of precious metals on Thursday was $1,223 per ounce.

On Friday, July 20, the markets reacted to the next statement by the Head of the American state. Trump said that he does not care what kind of tacit conditions exist, and he does not intend to remain silent while watching the actions of the US Federal Reserve. According to Donald Trump, tightening the Fed's policy and raising interest rates cause concern.

Recall that in 2018, there have already been two increases in rates, and two more are planned before the end of the year.

The price of one ounce of yellow metal on Friday stopped at $1,232.

Analyst of the precious metals market, Director General and Chief Investment Expert of U.S. Global Investors Frank Holmes is convinced that gold is an indispensable tool for financial security.

"Every month, Russia continues to accumulate gold, like China. Why is this? Because there is a real movement, very slow and gradual, so as not to trust the US Dollar anymore," Holmes told in an interview to Kitco News.

Save and increase your gold reserves!

Strengthen the financial security for YOU AND YOUR FAMILY!

GO TO THE INTERNET GOLD STORE