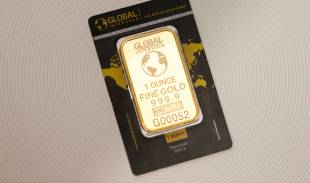 Learn why the price of gold is on the rise.

According to the results of 2017, the price of gold has increased by 14%. We have already written that the countless number of rich people opt for gold assets. For instance, the famous billionaire Ray Dalio (his brainchild - Bridgewater Associates) recommends investing in gold. A prominent investor explains making his choice in favor of gold blaming the political instability. In his opinion, only gold can protect against risks. Caption under Photo:  Ray Dalio is an American businessman, billionaire, the founder of the investment firm Bridgewater Associates.

On Tuesday, 20th of February, Morgan Stanley analysts expressed their concerns over the state of the U.S. financial market. In their view, the financial rally is a harbinger of the global U.S. stock market fall ahead. As one might know, during the market crash gold only strengthens its position. Therefore, companies that deal with the yellow metal on an ongoing basis are protected from damage and ruination.

"There is a high probability of disconcerting financial statements of companies simultaneously with a rising inflation."

On Wednesday, 21st of February, the dollar continued to strengthen its positions against the backdrop of fears caused by the growing U.S. debt.

In the mid-week, it was reported that Russia has increased its gold reserves by 18 tons in the first month of 2018 alone. In January, China purchased 64% per cent more precious metal than in December 2017. Hong Kong imported 18% more gold for the same period.

The demand for GOLD grows in different countries of the world.

On Thursday, 22nd of February, the dollar retained its high positions. After minutes of the Fed’s meeting were published, the market became driven by the need to raise interest rates. One of the major reasons for rate hike – the economic growth prospects. As reported earlier, only three rate hikes were planned in 2018, yet now many analysts are inclined to believe that an additional fourth rate hike is possible.

President of the Federal Reserve Bank of Minneapolis Neel Kashkari believes that Trump's government tax cut policy has contributed to trust building in the country.

The precious metal retained its value, staying at the $1,332 per ounce mark.

"Gold is a means of long-term capital protection from depreciation, which is caused by the growth of inflation."

On Friday, 23rd of February, it became known that Russia was way ahead of China by the amount of gold reserves in the country.

Thus, the trio of world’s leaders with the largest amount of the precious yellow metal now looks like this:

On the 26th of February, the price of gold increased sharply to $1,339 per ounce.

Investors are worried about how the Fed's new chairman will react to any sudden market crash, similar to what we all witnessed earlier this month.

Jerome Powell can present his arguments that will catalyze change in the market. Analysts assume that it will deliberately signal the policy direction change, including accelerating the interest rate increase.

On Monday, gold prices rose by 1.5%. Ole Hansen, Head of Commodity Strategy at Saxo Bank, said he keeps his positive outlook on gold.

Statistics that confirms the DEMAND FOR GOLD:

1. Since 2016, the best indicators for gold were recorded this year’s February.

5. Investment bank Standard Chartered (Britain) notes that gold will set a record in 2018.

Gold is a tool for protecting  savings from depreciation.

Gold is your Financial Security.

Create your own gold reserve with Global InterGold!