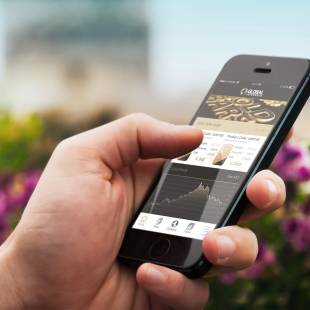 Investors are cheering: gold is on the rise, while cryptocurrency trading causes major risks.

Analysts argue that the declining value of the U.S. currency will accelerate the growth of gold in 2018.

Jeb Handwerger, the publisher of Gold Stock Trades news bulletin, predicts the doubling growth of gold prices. In his professional opinion, an ounce of gold will be worth $2,800 quite soon.

On Tuesday, 23rd of January, the dollar had weakened its positions due to uncertainty of the U.S. Executive branch budget. The Senate agreed on providing temporary financial assistance to the government.

A renowned economist and a Nobel prize laureate Robert Shiller argued that markets can be adjusted at any time. In his opinion, this can happen unexpectedly, and it's hard to figure out "which course of world history stimulates global markets right now."

On Wednesday, 24th of January, prices of the precious metal have gone up.

Ray Dalio, the founder of the investment company Bridgewater Associates, predicts a fast-approaching market wave. During a speech at the World Economic Forum in Davos, he noted that financially solvent investors will be awashed with cash. American billionaire Ray thinks it will put them in a foolish situation. He also warned that the FED's rate hikes pose a significant risk for the market.

Statement made by Steven Mnuchin, the United States Secretary of the Treasury, during his Swiss Alp visit, caused the dollar’s sharp fall. In his view, the weakening of the U.S. currency will have a positive impact on the economic growth of the country.

"Obviously, the weak dollar is beneficial for us given that it impacts trade and creates opportunities."

On Wednesday, the price of gold skyrocketed to $1,358.

On Thursday, 25th of January, the President of the United States of America Donald Trump did his best to stop investors from worrying about the weakening of the dollar.

Trump announced in Davos that the US currency will be further strengthened. The Head of State said that he expects to see “a stronger dollar.” Against the backdrop of such an announcement, the price of dollar has risen, while the price of gold was $1,347.

On Friday, 26th of January, investors witnessed gold’s market rally. Ole Hansen, the Head of Commodity Strategy at Saxo Bank, said that gold could rise above $1,450.

“Indicators of the geopolitical risk have increased since Trump took office...Currently, the main focus is on trade wars, as well as disruptive actions of North Korea and Iran against the United States.”

On Monday, 29th of January, Deutsche Bank experts shared their opinion regarding the current market situation.

According to their estimates, everything works in a strange way: rates are going up, yet the dollar remains under pressure. Deutsche Bank's currency strategist George Saravelos noted that the rate of the U.S. currency does not comply with basic principles.

Experts drew attention to the steady growth of gold. Some investors have already sensed the speculative nature of bitcoin and are returning to the precious metal that facilitates the strengthening of the financial security.

Daniel Marburger, Managing Director at CoinInvest from Hamburg, argues that gold has apparent advantages, noting that there are “no passwords you can lose, the volatility is much lower, sustainable growth and you can hold your investment in your own hands.”

Strengthen your financial security by investing into gold assets.