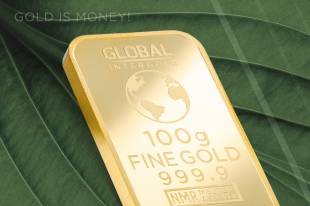 We tell about about the stability of gold during the market rally.

This week, the newly elected chairman of the FED Jerome Powell issued two statements at once that changed the market situation. The head of the FED commented on the process of rate raise, attributing its outcomes for benefiting the economic growth. In the picture: Federal Reserve Board Chairman Jerome Powell

On the 27th of February, the speech of the head of FED Jerome Powell made investors worried. Even though the Chairman of the Federal Reserve talked about positive trends, he stressed the need for policy tightening. It is safe to assume that there will be four rate hikes and not three.

"The FED had to raise the rate fast to stop inflation. This is not the case with the present situation... Now I do not see a serious risk, but I also do not see the threat of a downturn in any prospect."

On the 28th of February, analysts noted that market changes that occurred due to Powell's Congress speech were predictable.

"Powell's comments were to a large extent predictable…"

On the 1st of March, the dollar rose to its highest level since mid-January, while the euro currency was under pressure due to information regarding inflation in the Eurozone.

"We expect the FED to continue raising interest rates, it is driven by the U.S. economic growth," said Simon Gambarini, Capital Economics analyst.

February rally in the financial market affects major investors and their actions.

Swedish-Canadian tycoon, the owner of the gold and base metals mining company Lundin Gold Inc Lukas Lundin intends to spend up to $3 billion on industrial metals projects and another $1 billion on gold acquisition.

"Gold is the top choice for me in terms of investment," Lundin said in an interview with Bloomberg.

The billionaire said he considers spending up to $3 billion on zinc, nickel or copper.

Yellow metal became the second biggest investment for Lundin. He added that he intends to invest up to $1 billion on another gold project. In the picture: Billionaire, oil tycoon and the owner of the gold mining company Lukas Lundin

On the 2nd of March, a sharp decline of the U.S. currency has been witnessed. The dollar held almost six weeks at its maximum, but after the decision of the American President Donald Trump was made, the dollar lost its positions. The head of State explained his decision, justifying the intention to revive steel and aluminum industries, and stated the need to introduce a 25% import duty on steel and a 10% tariff on imports of aluminum.

Donald Trump spoke at the meeting with leaders of the largest companies within the steel and aluminum industries:

"You will get protection for the first time in a long time."

However, many experts believe that such a decision of the president was made out of anger:

After Trump's announcements, JP Morgan Chase & Co analysts led by the Director of Global Economics division David Hensley noted that the aggressive shift in policy could damage the U.S. and global economic expansion.

On Monday, 5th of March, the euro declined as a result of the elections in Italy. None of the parties won enough votes.

"Italy has not solved its long-standing problems, and now it will have new ones. Be prepared for long and difficult negotiations that will take months to finalize."

However, the position of the euro currency is backed up by the coalition created in Germany. Social Democrats approved a coalition with Christian democrats led by Chancellor Angela Merkel. This was a final vote, as a result of which a new German government could be formed.

David Garofalo, CEO of Goldcorp, said that gold is a barometer for inflation. In his view, in the conditions of the inflation growth, gold feels at ease.

Still, many investors are trying to protect their assets. Stable support in an unstable economic environment is provided only by the precious yellow metal.

Save and increase your gold reserves!