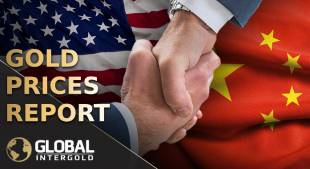 The reconciliation of the two warring parties was the highlight of the G20 summit in Argentina. The Chinese President Xi Jinping and the Head of the US state Donald Trump reached an agreement on suspending the trade war.

America agreed not to impose new tariffs after January 1, keeping the existing 10% tariffs on Chinese goods. A 90-day moratorium was introduced during which the negotiations would continue. The cost of gold was impacted not only by the truce achieved, but also by the statement of the Fed’s Chairman Jerome Powell, who noted that the current interest rate level was "just below neutral."

“The latest comments from the Fed’s Chairman Powell last week indicated he might be softening his hawkish approach to monetary policy,” said Wall Street veteran Andrew Hecht, the author of the Hecht Commodity Report.

American currency was backed up by the speech of the President and Chief Executive Officer of the Federal Reserve Bank of New York John Williams. The Head of the major regional bank announced this year’s 3% economic growth and the strengthening of the US labor market. White House economy adviser Larry Kudlow suggested that it was too early to talk about the Beijing’s consent to lower import tariffs on the US cars.

Kudlow notes: "The agreement has been neither signed nor sealed yet."

The main event of the week supposed to affect the cost of the precious metal, namely the speech of the Head of the Federal Reserve System Jerome Powell at the US Congress session. However, the hearing was canceled, as the nation mourned the death of George H.W. Bush. The American stock exchanges were closed that day.

On Thursday, the Brexit deal vote, set for December 11, has become the focus of attention. British Prime Minister Theresa May fears of a no-deal Brexit.

"Clearly, some people in the House of Commons seek to avert Brexit by calling off the vote, and that isn’t the right thing to do." British politician noted that the UK government must keep the promise.

European stock market indices fell due to the arrest of the financial director of the Chinese giant Huawei Meng Wanzhou. Analysts warn that Meng’s arrest could affect relations between the two largest countries: China and the United States.

On Thursday, members of the Chinese government announced their plans to cooperate with the US officials within the next 90 days to reach an agreement.

Experts forecast the beginning of a new cycle of rising gold prices in 2019.

Amid the weakening of dollar, the euro strengthened its positions.

At this year’s last meeting of the Federal Open Market Committee on December 18-19, the fate of gold will be decided. Supposedly, the committee members will do their best to “sufficiently soften future expectations“, preventing the growth of interest rates in the year ahead. Trey Reik, a gold analyst and senior money manager at the US unit of Sprott Inc, forecast that gold prices will rise from $1,360 to $1,525 in 2019.

Decide how to strengthen your Financial Security!

Gold is a reliable asset.

GO TO THE ONLINE GOLD STORE