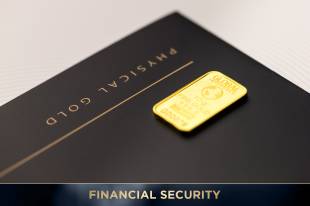 We tell how the global stock market crash affected the price of gold.

The 5th of February became "Black Monday", - the global stock market experienced a downfall. Dow Jones Industrial Average index suffered a sharp one-day price drop. However, the percentage drop was nowhere near the worst-ever point of 1987.

On Tuesday, 6th of February, the market shook up by reports on billion dollar losses of the richest investors in the world. Dow Jones crash caused Warren Buffett (Berkshire Hathaway) a severe economic damage amounting to $5,3 billion dollars. The head of Facebook Mark Zuckerberg lost a $3,6 billion dollar fortune. The owner of Amazon Jeff Bezos got poorer by $3,2 billion dollars.

"The stock market is experiencing panic".

On Wednesday, 7th of February, many investors urged not to panic because of the Dow Jones’ index level decline.

Axel Merk, the Chief Investment Officer of Merk Investments, said that investors should take up defensive positions. He noted that the role of gold has increased in importance.

Merk added that gold serves as a long-term asset, because a weakening of the U.S. dollar is expected in due course. Merk said that he counts on short-term rate growth, especially in Europe.

On Thursday, 8th of February, the President of New York FED William Dudley suggested that the direction of the American economy could soon change.

"If stock market quotes decline, it will affect the prospects for economy, as well as my views regarding the future course of monetary policy."

Some influential people strongly believe that rate rise in March 2018 is unreasonably early.

The price of the precious yellow metal was $1,312.

On Friday, 9th of February, the President of the Federal Reserve Bank of Kansas City Esther George supported the planned rate increase for the year 2018. According to the representative of the Federal Reserve system, such decision will strengthen the country's economy and will lead to a long-awaited development.

Concerns about rising interest rates and global inflation reflected on global equity markets. Earlier this week, Commerzbank analysts forecast the U.S. inflation and the FED’s policy shall continue to affect the value of the American currency.

The price of gold amounted to $1,315 per ounce at the end of the week.

On Monday, 12th of February, the alarming market sentiment intensified due to inflation. Investors noted that the 30 most influential American companies that determine the Dow Jones index, showed a stock price decline over the past week.

Economists and analysts alike call for the following actions:

buy gold to make a profit.

The official representative of the Bank for International Settlements (BIS) noted that bitcoin and other cryptocurrencies became "a combination of a bursting bubble and an environmental catastrophe." Bitcoin prices have dropped sharply over the past couple of weeks, losing about two-thirds of their value. All these phenomena have been the consequence of LFS (Lack of Financial Security) virus.

In comparison, European funds added only 7,6 tonnes of gold ($35 million dollars) for the first month.