Why is gold worth buying? 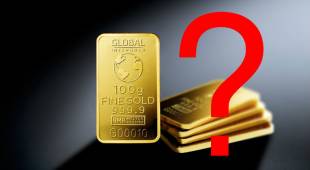 Inflation is as a general increase in the price level of a country, the rise in prices for services and goods. During such a period, money depreciates, partly losing their real value. The purchasing power of the population gets significantly reduced. We spend more money to buy goods to satisfy our daily needs, yet this time we can buy less than before.

People care about the safety of their savings and try to accumulate them. Inflation poses a significant threat to the personal financial security of everyone.

In different countries of the world, inflation manifests itself in its own way. Its level depends on the degree of development of the state and its economic policy. Inflation is a manifestation of the LFS virus "lack of financial security", which causes difficulties in human life related to the inability to protect personal savings. What are the main reasons behind the depreciation of money and the reduction of the population’s purchasing power?

The main factors of inflation within a context of the lack of financial security:

● unstable economic situation in the country

In the photo: the rate of inflation in the world according to the International Monetary Fund, April 2018.

People throw their money away because they cannot buy a thing anymore. Unclaimed money of small denominations is all over the streets now.

The depreciation of Venezuela's national currency prompted the local craftsmen to utilize the "paper money" in a rather unusual way. Resourceful people began to make souvenirs and handicrafts from useless banknotes and sale them to tourists. Financial investments are not required for such a type of workmanship. All that is required: fantasy and skill of the creator.

A 25-year-old street vendor from Venezuela Wilmer Rojas specializes in weaving and selling of bags, baskets, wallets and hats made from depreciated banknotes. The handyman says that Venezuelan money is worth nothing, but he does not throw them away, he profits from them. Rojas has many children. Given the conditions of the national crisis, he has to earn a living from what is lying literally under his feet to support his family.

The craftsman uses on average 800 banknotes to make a single large bag. For example, 500 grams of rice can be bought in Venezuela for that kind of money.

In the photo: Wilmer Rojas sells every bag for 300,000 bolivars, which is enough to buy a kilogram of meat or six packs of cigarettes.

In 2016, the Venezuelan artist Jose Leon was shocked by the catastrophic domestic currencies exchange rate fall. He then created a protest petition in social networks against the devaluation in the country. He now uses depreciated banknotes of the local currency as canvases for his paintings. Leon turned the national hero Simon Bolivar, depicted on the front of the banknote, into various popular movie heroes, cartoon characters or celebrities. His sells his "money paintings" to foreign tourists.

"I can raise the price of the currency by almost five thousand percent with my colored pens and a small blend of wit" the artist jokes. In the photo: "money paintings" by Jose Leon, $20 dollars each.

Gold – the basis of financial security

There is an overabundance of money due to their excessive issuance in the world. The United States increases the number of dollars each year. The growth in the money supply is one of the important reasons for the price increase of goods and the depreciation of currencies. It is hard to predict what the price level will be in the future. In a difficult economic situation, positions of gold remain stable. The demand for the yellow metal is growing steadily.

While other assets end in a fiasco, gold is gaining momentum. Those people who work with gold managed not only to protect their money from inflation, but also accumulate their reserves.

How to preserve and accumulate?

People who care about the safety of their finances are concerned with the question of whether their personal savings are "devoured" by inflation or not.

Yes, losses of money are inevitable if you hold your savings in a paper currency. Every year and for the same amount of money, you can afford to buy less goods and services. Experts advise to buy the yellow metal and investment gold bars in order to protect financial resources from inflation.

Gold is the guarantee of financial security. We want our clients to be protected in an unstable world, we want them to achieve success and prosperity.

One does not need to be rich to build a profitable business on gold and have own reserves of the precious metal. Take advantage of the benefits that are available for clients of Global InterGold: purchase gold bars in the company's online gold shop. Do not miss the opportunity to preserve and accumulate your capital!

Gold is the foundation of your financial security.