Why do you need gold? 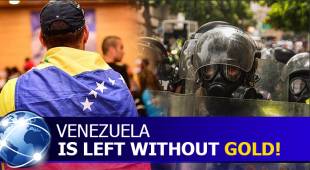 More and more countries are realizing the importance of gold as the foundation of their financial security. The deteriorating situation in the world, as well as the painful experience of the countries affected because of their imprudence are pushing them towards gold.

The case of Venezuela

This Latin American country has been in a prolonged crisis for many years now: inflation exceeds one million percent, people do not have enough money to buy food or basic necessities, the population is migrating en masse. The Venezuelan government is in a desperate need of additional assets to improve the situation in the country.

To this end, the government opted for gold repatriation, bringing back some of its gold reserves from the Bank of England. The refusal of bankers deprived the country's economy of $1,2 billion.

By storing gold reserves within its own territory, Venezuela could significantly improve its position and lower the rate of inflation. Gold saves the state when the economy is going through rough times: gold once helped India and South Korea to overcome the crisis.

By entrusting the tool of its financial security to the wrong people, Venezuela made a big mistake, becoming a striking anti-example for the rest of the world. Gold – in your vault only

Typically, central banks store part of their assets (foreign exchange reserves) abroad to generate profit, but the growing geopolitical tension is forcing them to rethink this strategy.

The precedent of Venezuela’s gold will convince even more countries to keep gold at hand and regularly stock up the reserves. History proves that gold helps both individuals and entire states, especially during tough times. Adverse economic and political processes spare no one, so you should take care of your financial security in due time. This is the responsibility of ordinary people, not just state-owned banks, it is important to have an emergency reserve to protect savings.

Gold ideally serves this purpose because:

Everyone can create a personal gold reserve. It is enough to buy a small amount of gold every month and store it in a safe place.

Global InterGold has been working with gold for nine years, making it accessible to everyone and helping people achieve Financial Security using gold.

Use the time-tested tool that was known for centuries to preserve and accumulate your capital!

LEARN HOW TO STRENGTHEN FINANCIAL SECURITY