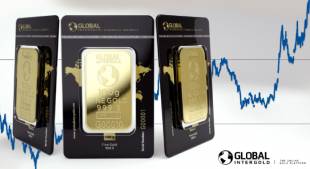 The second half of 2019 was very successful for gold. The price of gold has reached its record high in several major currencies. Among them: British pound, Indian rupee, Japanese yen, Canadian and Australian dollars.

Let's see how gold has excelled in these currencies over the past year: The gold rate has also sharply increased in other currencies: for example, in euro, yuan and US dollars. What is the reason for such success?

Due to the aggravation of the US-China trade war, the world has turned to gold. After the American president announced the imposition of additional import duties on Chinese goods, the price of the yellow metal surged.

“This confrontation continues to define future price moves, as a result, gold hits all-time highs in many currencies. Moreover, it has the potential for further growth,” said Jim Wyckoff, an analyst at Kitco, specializing in precious metals.

“People are getting worried, so they get rid of currency and acquire solid assets,” noted Phillip Streible, senior market strategist at the brokerage firm RJO Futures.

What milestone has gold achieved?

The World Gold Council* reports that the gold demand has increased by 8% in the second quarter of 2019 – the highest growth rate in the last three years.

This was largely facilitated by the actions of central banks that acquired the largest amount of gold over the past nine years. The leaders in terms of gold procurement are Russia, China, Kazakhstan, Turkey and Poland.

What will happen next?

Gold continues its victorious march around the world, demonstrating an obvious advantage over fiat money*, which remains extremely vulnerable in unstable economic conditions.

The report by the Bank of America Merrill Lynch, one of the largest banks in the world, states: gold has a real potential to reach the price level of $2000 per ounce in 2020.

The world economy has been slowing down, and trade conflicts have intensified. Against the background of the ongoing turmoil, gold becomes a lucrative means of investing money, guaranteeing Financial Security. The current situation indicates that the biggest successes of gold are yet to come.

*The World Gold Council — the market development organization, founded by the world's leading gold producers to stimulate demand for gold.
*Fiat money — a currency without intrinsic value (not backed by precious metals), the nominal value of which is established and guaranteed only by the state.