Why Russia increases its gold reserves? 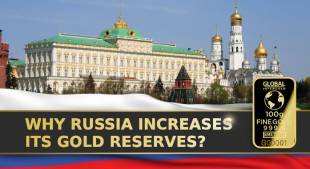 The golden future of Russia

In 2018, the financial crisis broke out in the Russian Federation. The national currency lost more than 20% of its cost in nine months. In the beginning of the year, the US dollar cost 56 rubles, in September — already 68. The outflow of investors from the country has exacerbated.

Despite the problems in the financial sector, the Central Bank of the Russian Federation has increased the international gold reserve by almost 134 tons, amounting up to 1972 tons. Over the past five years Russia has been a leader in the field of gold purchasing; by 2019, the country's reserves are estimated to reach nearly 2030 tons. Central Bank facilitates the purchase of gold with funds generated as a result of the US debt obligations sale.

The PRC and India, likewise Russia, have experienced a collapse of the national currency in 2018. The Russian government proposed countries to sign a tripartite agreement on the creation of a gold deposit in the Transbaikal region.

China Gold plans to invest $460 million to conduct an in-depth exploration of the field and construct a gold ore processing facility. Besides investing money, China also plans to apply innovative solutions for the extraction of the precious metal from hard rock.

The yellow metal was found on the territory of the Klyuchevskoye field in 1901. Ore with a high content of gold (up to 12 grams per ton) was mined there. In 1957, the field was depleted and mothballed. This is the first business project teaming up the three countries for the joint production of 75 tons of gold.

Russia plans not only to increase the production of the rare yellow metal within its territory, but also to increase its gold reserves in the future. The content of gold in Klyuchevskoye ore reaches two grams per ton on average.

Why does Russia purchase gold?

Since 2005, the reserve of the precious yellow metal of Russia has increased five times, within the last 12 months it increased by more than 200 tons. The opinion of experts is unequivocal: the Central Bank is trying to protect its finances from possible collapses. Based on what is happening with the currencies of Latin America, Asia, Africa and Europe, it is a timely and right decision. An increase of the gold reserve will help Russia to become more independent from the dollar, giving the ability to resist the pressure imposed by Western currencies.

President and founder of Eurasia Group Ian Bremmer believes that an effective global weapon exists. He considers finances as the weapon. A cut-off from the international market and the weakening of dollar, these are real muscles of politics.

Russia's tactic with respect to gold sets a great example not only for countries but also for common people. The precious yellow metal is a financial tool that anyone has the right to use. Gold is the best insurance against exchange rate fluctuations. Unforeseen life problems won’t catch you by surprise. The yellow metal protects both the head of state and the ordinary person!

Gold is a reliable asset

that strengthens your Financial Security.