Will the gold standard return? 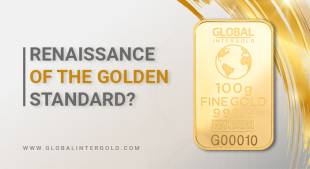 On May 30, the Prime Minister of Malaysia Mahathir Mohamad made an unexpected proposal at the International Conference on "the Future of Asia" in Tokyo. He recommended the countries of East Asia to create a single currency backed by gold.

"Now we are dependent on the US dollar, but the dollar has become unstable. The currency that we suggest introducing should be based on gold, since gold is more stable," the head of the Malaysian government said.

Does this mean a return to the system of gold standard*? In the photo: 93-year-old Malaysian Prime Minister Mahathir Mohamad, whose political career has lasted for more than half a century.

Why does Asia need "golden money"?

The introduction of a common currency backed by the precious metal will give the region obvious advantages:

"The provision of gold will avert the situation when governments accumulate debts by printing more and more money."

Nathan Lewis, an economist who specializes in the 21st century monetary policy:

"The idea of fiat money* is not very popular in Asia. Asians prefer a stable, predictable currency that is free from outside interference."

In Asia, the lack of credibility of fiat money is due to the economic upheavals of the past. The crisis of 1997 hit the region the most: national currencies collapsed in several countries. For example, the Thai baht depreciated by almost 100%, while the Indonesian rupiah — by 228%. At that time, gold played a significant role in stabilizing the whole situation — South Korea serves as a bright example of it. In the chart: in 1997, several Asian currencies experienced a dramatic fall.

According to the Singaporean expert Manu Bhaskaran, despite the increased capacities, the economies of Asian countries are still vulnerable, therefore only gold can be a reliable support and a foundation of Financial Security.

What are the plans of the BRICS?

Speaking about the return of the gold standard, it is worth focusing on the BRICS* group. The subsequent events that can happen within that group may be followed by a new-found world domination of gold.

The group consists of the countries with significant gold reserves as well as impressive production and consumption rates of gold. In 2015, the BRICS member countries established a joint financial institution, namely the New Development Bank (NDB). Since 2017, negotiations have been underway to create a single internal gold trading system.

It is logical to assume that the next step will be the creation of a common gold-backed currency. Economist and geopolitical analyst Peter Koenig is certain that the BRICS currency will become a sought-after alternative to the dollar, resulting in the change of power balance in the world.

48 years after the abolition of the gold standard, we see clear signs of its revival. The reasons can be easily explained: while the global economy is torn by trade wars and crises, the yellow metal is steadily moving upwards. Last week, gold broke the six-year price record.

The growing vulnerability of currencies makes us remember the times when money was backed by the precious metal, and inflation was almost absent. Nowadays, the leaders of various states call on to reintroduce the gold standard. Modern realities are forcing more and more people to rethink the role of gold in maintaining the economic stability.

*Fiat money — is a currency without intrinsic value (not backed by precious metals), the nominal value of which is established and guaranteed only by the state.